Jordan Lockett is a musician and musical storyteller who lives in the small coastal village of Port Fairy. His creativity is fuelled by a rich local history and welcoming community in this breathtaking spot.

Port Fairy's sensational position on the edge of the Southern Ocean is a constant source of inspiration for Jordan. The beauty of the town's natural landscape is the first thing that stands out.

'You drive over Tower Hill and see the Norfolk pines, this beautiful ocean, big Armstrong Bay. It's this magical place. All these beautiful historic cottages and boats. It's such a beauty.'

As part of The Southern Ocean Sea Band, Jordan writes and performs songs inspired by the sea, which draw lovingly on the history of Port Fairy. The past feels very close for Jordan. 'The buildings almost speak to you,' he says. The village streets are dotted with picturesque bluestone and sandstone buildings, quaint whalers' cottages near the wharf, and little old timber homes, all of which add to the town's historic feel.

The port is still very much a working port today. Fishing has kept the town thriving over the years, and the turning basin – where large vessels once turned around – is evidence of a rich shipping history. 'You can see that history when you go down there,' he adds. 'You can really feel it.'

Jordan's passion for Port Fairy's history is shared by other members of the small community, including local historian Marten Syme, who is part of the Historic Lifeboat Society. 'They've got the original lifeboat,' Jordan says. 'They take it up and down the river on New Year's Day, and various days throughout the year, and they work hard to keep that history alive. It's beautiful to see.'

For Jordan, a sense of community is a huge part of what makes Port Fairy an incredible place to live. Life is full of special moments every day. 'There's such a warmth in the community at Port Fairy. I love knowing that you’re going to bump into people and have chats with them.'

The village has a really strong spirit of camaraderie and support, and 'a warmth that we embrace each other with'. He's effusive about the welcoming atmosphere of the community, with people always ready to say hello and bring newcomers into the fold. It creates a strong sense of connection. 'We pick each other up when we need to, and we're there for each other,' he says. 'We're all in it together.'

This sense of community, history and wild landscape all feed into the town’s vibrant creative culture. 'There's so many creative people in Port Fairy,' he says. 'Artists and authors and songwriters and glass-blowers and potters.' He's convinced there's 'something in the water' here. 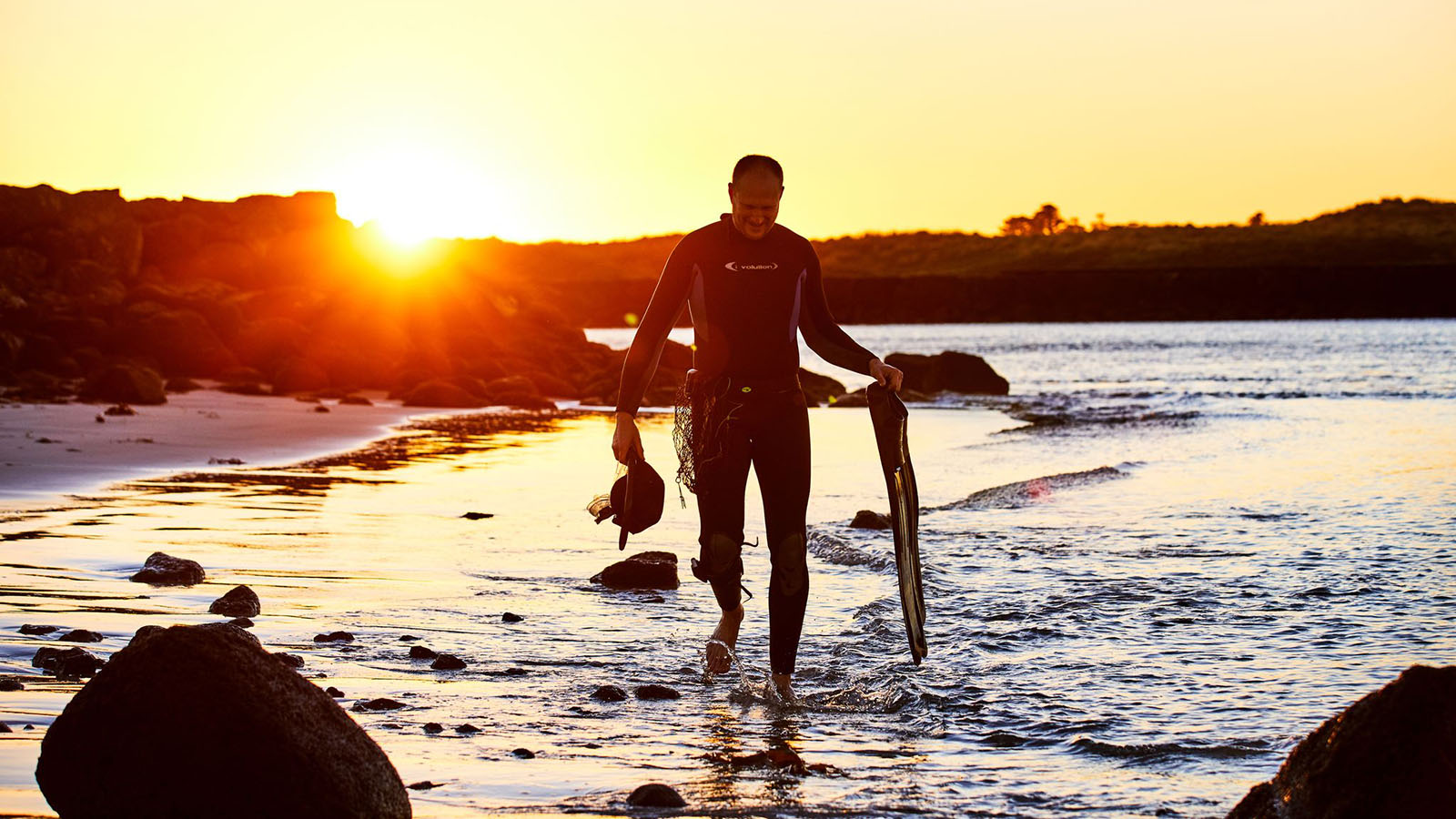 'Being surrounded by water has healing properties… People have talked about that for thousands of years. We're naturally being healed by the environment. And I think that feeds our creativity and the psyche of people who live here.'

One product of all that creativity is the internationally renowned Port Fairy Folk Music Festival, which has run annually for more than four decades. 'There's all this cultural world knowledge, and music and dance, and song and stories that come out of the festival,' Jordan says. 'That stays with us.'

Of course, history in this area goes back far beyond white settlement. 'For thousands of years Indigenous people lived here and they flourished in this beautiful environment,' Jordan says. Port Fairy was once named Pyipgil Gundidj and sits on the lands of the Peek Whurrong people and Eastern Maar Aboriginal Corporation.

Jordan heads to nearby Tower Hill for a 'tree fix' and learn more about local Aboriginal people's deep connection to this region. He recommends Worn Gundidj at Tower Hill Wildlife Reserve – a two hour interactive walk led by an experienced guide, where you can learn about the environment, Aboriginal history and bush tucker. Tower Hill Wildlife Reserve is a kind of 'magical' Jurassic Park for Jordan – an ancient volcanic landscape, where you can see koalas and emus.

Jordan says it's important for him to connect with Indigenous culture and history. He says this wasn't taught in detail when he was at school, and was presented only from a non-Indigenous point of view. 'Going out and engaging with the land and the country and learning, it's just been a healing, powerful experience, and something I want to pass on to my kids.' Jordan rates the beaches on Victoria's southern coast, including Port Fairy's East Beach, among the best and most beautiful he's seen in all his world travels. He loves to head out for a surf or dive, and to look up, to see migrating shearwaters (or mutton birds) flying high above him.

Each year these birds migrate to Griffith Island, off Port Fairy, where they nest and hatch their young. 'They're the longest-staying tourists we've had,' he says.

You can spot the birds returning to their burrows on the island after a day spent fishing at sea. Though they depart again soon after their chicks can fly, one thing is guaranteed: the shearwaters always return to Port Fairy.

Destinations
Uncover history in every corner of this charming fishing village at the end of the Great Ocean Road with tree-lined streets and heritage buildings.

Great Ocean Road
Get to know musician and musical storyteller Jordan Lockett as he shares his favourite spots in around the village of Port Fairy.

Art & culture
Delve in the rich history and heritage of the Great Ocean Road region, from Aboriginal Dreamtime to maritime museums, lighthouses and shipwrecks.

See & do
Wonder at some of the most beautiful natural attractions in Australia, ancient rainforests and abundant local wildlife in the Great Ocean Road region.